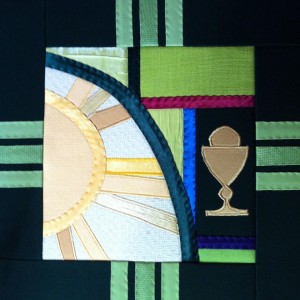 “Keep awake, therefore, for you know neither the day nor the hour.” On Christmas Eve, I remember watching and waiting for Santa Claus. My older siblings would sometimes see his sleigh flying above the fields, but when I came to the window to see for myself, he would have just slipped below the trees. And I would stay at the window watching and waiting, hoping to catch a glimpse of something wondrous. I don’t think I knew exactly what I was looking for, or what I expected to see, but I was prepared for something spectacular. It never occurred to me that Santa wouldn’t come. My trust was complete. Santa was coming to my home with presents for me, and I would wait and watch, certain that it would happen.

When Jesus tells us to keep awake, to watch for him, it’s like a child watching for Santa to come. We are trusting and expecting something wonderful to happen, without worrying about how or when or whether we will be a part of it. Our trust is complete. The parable Jesus sets before us today, the parable of the 10 bridesmaids, is about that kind of child-like excitement and expectation. It is about that kind of trust and wonder. It is about waiting and watching for the best thing in the world to happen, which we wouldn’t even dream would not include us.

Matthew is working on this theme of radical inclusion first, and then the possibility of exclusion later. All ten girls are invited to the wedding. Their invitation is not based how good they did on their SAT tests or how pretty they are or how well they know the bride and groom. All ten girls are part of the wedding party. They bring along lamps that they don’t expect they will need, because it’s an afternoon wedding, and they probably will be home long before dark anyway. But just in case, they all bring along full lamps, enough to light their way home, if necessary. However, five are the compulsive types. They also drag along bleach bottles of extra oil. You know the kind of person? The kind who goes on a picnic and brings along a sleeping bag, “just in case we have to spend the night.” The kind who goes to a concert and brings a sandwich in case it gets long. The kind who goes on a cruise in the Caribbean and brings along a rain coat and a warm hat, “just in case.” So, in the common sense of the world, the first ones were the smart ones. Logic dictates that they wouldn’t be gone that long and carrying along an extra jug of oil was going to get in the way of the party. How fun would it be to dance at the wedding hauling that bleach bottle of oil? Some people! Silly worry warts!

But the bridegroom is delayed. Doing what? I always wanted to know. Getting pictures taken? Cruising town? Having a last fling with the guys? Who knows? For whatever reason, the bridegroom is delayed. It gets late. The girls sit up gossiping and giggling in the light of the lamps until they fall asleep. Finally, at midnight, they are called – “Look! Here is the bridegroom! Come out to meet him!” So, the sleepy girls get up and get ready to go into the wedding dance. But those who did not bring extra oil are now out, and the others are not willing to share. So those without go to buy more – in the middle of the night. While they are trying to get someone to open their shop and sell them oil, the bridegroom comes, all troop into the wedding hall, and the doors are locked. When the others come back, they can’t get in. The bridegroom says, “Truly I tell you, I don’t know you.”

Now, there are all sorts of problems with this story. Inquiring minds want to know – why the ones with extra oil couldn’t share? Why did the girls think they could even find someone to sell them oil in the middle of the night? Why did they even need lamps if they were in a house with lots of other lamps? And why was the bridegroom unable to recognize girls he had invited in the first place. It’s actually a story with lots of holes in it. But remember that it’s not a story about bridesmaids at a wedding. It’s a parable – it’s a parable about the Kingdom of Heaven. The punch line is – “Keep awake, therefore, for you know neither the day nor the hour.” It’s not about girls or lamps or oil. Finally, it’s about waiting and watching for the Kingdom of Heaven. Back to Santa Claus. Like the bridesmaids waiting and watching for the wedding dance to start, like a child waiting and watching for Santa Claus to come, and that is how we are waiting and watching for God’s Kingdom to come. The people at Matthew’s time – around 70 AD – were living in tough times, and they were wondering why Jesus was so long coming back. This parable is told to help them wait, to encourage them to be patient, to give them hope that they have not been forgotten. It is absolutely not about being good enough to get an invitation to the party. Getting in to heaven has never been, in any of Jesus’ stories at least, about goodness – or badness either, for that matter. Getting in to the party of God’s Kingdom has always been only about faith, about trusting and knowing that there is a party waiting for us, and that God wants all of us there. Personally, I think the foolish girls would have been better off just staying with the others, standing in the dark without a lamp. Then they would have gotten in with no trouble whatsoever. Their lack of faith was in thinking that the extra oil mattered, and leaving the party to get more. The problem is not that they were unprepared but that they didn’t trust the bridegroom to take care of them – to provide what they needed to join in the party.

That’s the way it is with the Kingdom of Heaven. God is throwing a party for everyone. Every prodigal son, every corrupt servant, every foolish bridesmaid, every lost sheep is welcome. God wants his Kingdom filled with all, the good and the bad, the wise and the foolish, the responsible and the prodigals, the weed and the wheat, the fish of every kind, the sheep of every nation and every fold. All it takes to get in is the simple, child-like faith that waits and watches for Santa Claus, that waits and watches for the dawn, that waits and watches for the sun of righteousness to rise with healing on its wings. And the bridegroom is ready to dance with all the guests and teach the steps of God’s heavenly dance. It’s what the coming season of Advent is all about – waiting in faith and hope for God to fling open the doors, and to start the heavenly party that has no end. AMEN