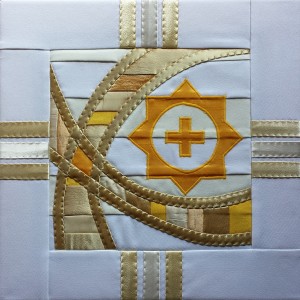 In the spring the sheep are eager for the pasture. The grass is lush and inviting, and the lambs that have not known the freedom of the pasture run and kick their legs for joy. In the spring, the lambs run across the pasture. And on the prairies, where the pasture goes on and on, mile after mile – as it does west of the Missouri River – the lambs can easily become lost. They run over a little hill and find a lush patch of fresh green grass, and then they run and find another. Spring in wonderful for the lambs – but it is also dangerous and deadly. And on the prairies it happens so suddenly. The sky darkens, the thunderheads roll across the prairie, and the lamb that has strayed turns and looks for the safety of the flock. But when he looks, he cannot see what has happened to the flock, and he cannot hear the singing of the shepherd. He is lost, alone, and afraid; he does not know what to do, so he returns to the grass and puts his back to the wind.

It was an October rain that was falling as Paul ran to his car on his way to his apartment from work. Paul had a business degree from college, and now he was starting a career as a department manager at an upscale retail store. It was the kind of work he had wanted and he was seeing possibilities for promotions – room for him to develop his skills and to advance. But the October rain reflected Paul’s spirit more accurately than the promising hopes he had at work. Paul had grown up in a small town, but he had left friends and family behind for four years of college, and then he had left his college friends as they all went their separate directions. Paul did not make friends easily, and he found it hard to keep the ones he made. He felt alone in the city. He was doing work he wanted to do, but he wasn‘t happy. Part of it was just the daily routine; part of it was questioning the real value of the work he was doing. But deeper than that, Paul was just feeling very alone – the few friendships he had seemed so shallow; and he struggled to find any real meaning to his life.

Church had always been part of Paul’s life when he was growing up. His parents were active and involved; and he had participated in all the youth stuff – he even taught Sunday School for a year. But church was something he had left behind when he went away to college. It was something from home, not where he lived now. He went to church when he was home, but it was a kind of nostalgic experience. He never gave much thought about how it connected to his daily life. He went because his parents expected him to go. But the possibility of going to a different church in a different place was not something Paul had seriously considered.

He talked to his mother that night on the phone; she could tell his spirits were down. “Have you been to church lately?” she asked.   Church was always her solution to every problem. Her friends were all at church, and they always came through for her whenever she had any troubles. She wanted her son to have that same experience. But his mother saw life completely different from Paul. Her faith saw so simple: “The lark’s on the wing; The snail’s on the thorn; God’s in His Heaven; All’s right with the world!” But all was not right with the world that Paul lived in; and his sense of church was that it ignored much of the harsh realities of life. Paul’s faith was not as pure and simple as his mother’s. His faith was riddled with all sorts of doubt. At times, he even questioned whether God existed – and there were parts of the Apostle’s and Nicene Creeds that he just couldn’t say. Oh, he could go to church at home, because there he was family; but he didn’t think he could honestly go to any other church without being a hypocrite. He just didn’t believe like he thought church people were suppose to believe – he had too many questions and doubts. And he would rather stay away from church than go and pretend that he was just like the other people at church who truly did believe everything they said.

Paul, you see, heard in his mind, not the voice of the shepherd that opens the door of the sheepfold to the lost and lonely, but a voice of judgment and condemnation that keeps the door of the sheepfold closed to all who do not truly and rightly believe. The voice he heard was not the voice of the shepherd, but the voices of the other sheep. It was a voice shaped but the actions and attitudes of faithful church people who got all worked up over what was right and wrong for a Christian to do and believe. And Paul knew that he simply did not measure up to that standard any more. Oh, he tried to hang on to believing in God, but he had so many doubts. He knew his faith surely wasn’t good enough for him to be part of any church except for his parent’s church.

On the prairie, the lamb that has strayed, listens as the wind begins to howl. He things he hears a voice in the wind, and he starts walking toward that voice. But then the voice turns angry and the frightened lamb finds a rock to hide behind. A cold rain is beginning to fall, and the lamb shivers as the cold rain begins to penetrate his thin wool coat.

Paul had not planned to follow his mother’s advice. Church was a place for families. He’d feel too conspicuous going to a strange church all by himself. But then Tim, one of the other store managers, asked Paul to join him and his wife for dinner and a movie on Sunday. Paul hadn’t gotten many invitations like that, and he liked to possibility of developing a closer friendship with Tim. He said he’d be happy to join them. Then, as if it was an afterthought – maybe one that penetrated Paul’s low spirits – or one that was sparked by prayer or some mysterious movement of the spirit – Tim asked if Paul would also want to join them for church before dinner. Tim made some awkward apologies about not knowing whether Paul was Lutheran, or if he had another church that he went to. But Paul said “Yes,” and it made him feel good – his mother, at least, would be happy that he had gone to church, and now he wouldn’t have to go alone.

The church seemed more inviting than Paul had expected; and there were more young people – in their twenties and thirties – than at the church in Paul’s home town. The hymns and liturgy were familiar, but they sounded different – almost more alive. Paul had grown up thinking that church was all about believing and doing what was right. That had been fine for his parents, but it didn’t work for Paul. He didn’t see the world in the same way that his parents did, and he certainly didn’t hold the same picture of God that they held – sometimes he couldn’t hold on to any picture of God at all. He had decided that because of all his doubts, there was no place for him in the church. But this church was different and the voice that Paul was beginning to hear in his mind was a voice of invitation and acceptance. It was a voice that accepted Paul, even with all his doubts. The pastor talked about doubt in her sermon – she said our faith is not so much thinking and doing what is right, as it is turning to God in the midst of our doubts. On that Sunday, Paul realized – for the first time – that he was just like all the others; and that the voice of the shepherd was a voice that opened the door of the sheepfold to people like Paul who struggled to believe. And Paul found that morning that we was truly welcomed and greeted without judgment or reservation. And the darkness that had been penetrating his spirit began to be lifted in the accepting spirit of that gathering of God’s people. For in that church, the accepting and welcoming voice of the shepherd was the voice that was heard in all that was said and done.